The unique geographical location of Kazakhstan - in the very centre of the Eurasian continent - has contributed to the emergence of transit “corridors” between different countries and civilizations since ancient times.
Read the Article

The Silk Road was one of the greatest achievements of ancient civilizations; for many centuries trade goods and commodities were the driving force to cross the vast distances, but along the way, people exchanged new technologies, religion, art, architecture, culture, music and dance – the Great Silk Road linked the material and spiritual culture of many peoples.

The Great Silk Road is the grandest trade route to connect East and West since the 2nd century BC, and was the reason for the growth of historic cities, ancient monuments, even tribal states – as well as the constant exchange of cultures.
Though the specific routes of the Silk Road changed over the centuries, there were two main routes between the East and West of the Eurasian continent: the South Road, from the north of China through Central Asia to the Middle East and North India; and the North Road, from northern China through Pamir and the Aral Sea area to the lower Volga, the Black Sea basin and further on into Europe (there were also several roads connecting north and south).

Most of the Silk Road trade brought goods from east to west, and (as the name implies) the main commodity was silk. Light, compact, with enormous demand and a high price, it was an ideal commodity for long distance transport. The Silk Road (Seidenstraße) name was, by the way, coined in 1877 by the German geographer Ferdinand Richthofen in his seminal work China.

The section of the Silk Road running through Central Asia played a crucial role in the development of Kazakhstan’s urban culture until the 14th century, stimulating the rise of a string of urban centres in the south of Kazakhstan. In Zhetysu (Seven Rivers), for instance, Silk Road trade contributed to the rapid growth of cities such as Otrar, Syganak, Sauran.

The development of the merchant marine navigation along the coasts of the Middle East, South and South-East Asia interfered with prosperity of the Silk Road. In the 14th and 15th centuries, maritime trade became a more attractive option compared to the long and dangerous overland caravan routes: cargos by sea between China and the Persian Gulf took around 150 days, while the overland caravan route from Tana (Azov) to Khanbalik (Beijing) took twice as long; one ship carried as much cargo as a caravan of 1,000 pack animals. So in the 16th century the Great Silk Road finally ceased to exist as the key connection for transcontinental trade – although some segments continued to function for a long time; the caravan trade between Central Asia and China continued until the 18th century, for instance. 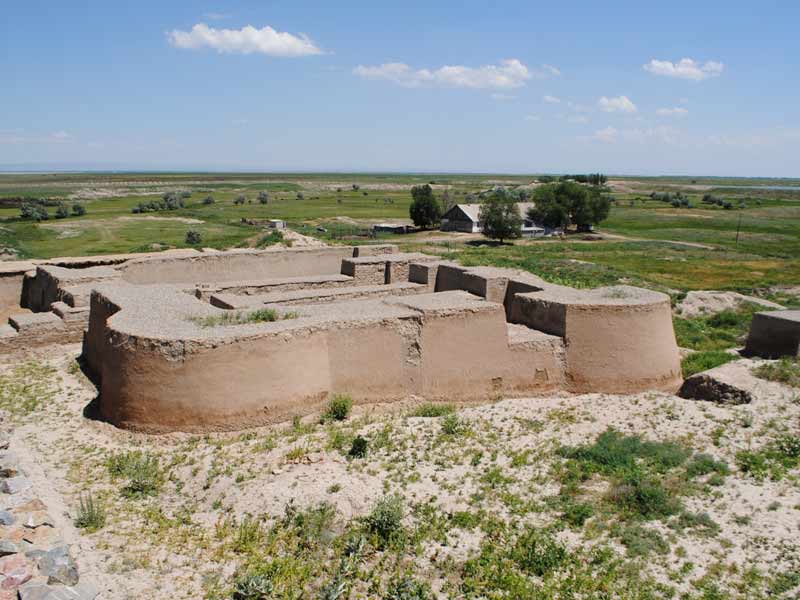 The Silk Road: key to future rooted in history

The jewel of the Silk Road Turkestan