Trace the origins of tulips in Kazakhstan 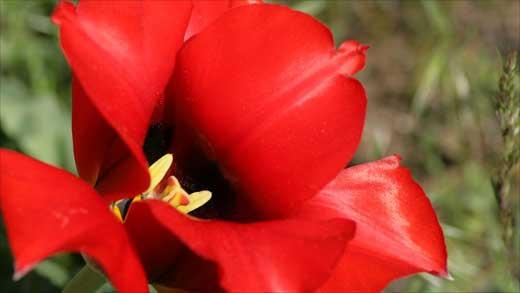 
Tulips from Amsterdam are world famous, but most Dutch varieties can be traced back to their origins in Central Asia.

In the springtime, Red Hill is so named because of the thousands of wild tulips that carpet the ground. This area in southern Kazakhstan is famed for its tulips thanks to a unique combination of climate and soil.

The red and yellow flower is called the Queen Tulip or Greig’s Tulip. They grow on drier, sunnier southern slopes. On rocky north facing slopes, the Kaufmann Tulip thrives. This species, with its smaller flower head, blossoms in white or yellow. These two species played important role in the cultivation of Dutch tulips.

Yevgeny Belousov, Kazakh biologist, said, “Many types of cultivated tulips are descended from either the Greig or Kaufman tulip species. People say almost seventy-five percent of cultivated flowers come from these two.”

Tulips were first cultivated in Holland in the 17th century and were thought to have been brought from Central Asia by the Ottomans.

This retired tulip cultivator from Holland, has been making trips to Kazakhstan for more than a decade. He’s still looking for unseen tulips. The varieties in more remote locations are hard to access.

Vim Lemmers, tulip enthusiast, said, “The area is so immense, it’s great. We are still finding new species. And we can now prove that by means of counting DNA.”

36 known types of tulips are growing in Kazakhstan today. Half of them are listed in the Red Book of Endangered Species. Experts believe the remoteness in Kazakhastan will help protect the wild species from possible extinction in the future.